Gammon is versatile, easy to cook and relatively cheap. Any leftovers can be used in sandwiches, quiches or omlettes so it’s great for meal planners as it can form part of several meals.

Should I soak Gammon before Cooking?

It’s entirely up to you. I personally don’t and find it’s fine without soaking, but it is a matter of personal taste. If you find that it’s too salty, without soaking, try soaking it next time and see if you prefer that!

How to Slow Cook Gammon

Remove all the packaging from the Gammon, including the inner wrapper.

Put the Gammon Joint in slow cooker with a splash of water. This helps keep the meat moist and hopefully will help stop the slow cooker pot from cracking. The Gammon will create its own cooking liquour so literally just a splash is enough. I normally add about a small glass full. Replace the lid of the slow cooker

Cook on High for around 3 hours or on Low all day. If you want to slice it don’t over cook it. If you’re wanting it to be served ‘pulled’ like the texture of pulled pork, cook it for longer.

Once the cooking time is up, lift out of slow cooker and put the meat into an ovenproof dish.

Crisp up in the Oven

If you want to use any glazes or flavours to the meat now would be a good time to add them.

Honey and Mustard brushed over the top works well. If you like it plain, just score the fat on the top of the meat with a knife (in a criss-cross pattern) and then cook in oven for about 20 mins to half an hour to crisp up. This is optional, you can serve it straight from the slow cooker if you wish, but the fat will not crisp up in the slow cooker.

Alternatives to the Cooking Water

What to do with leftover Gammon 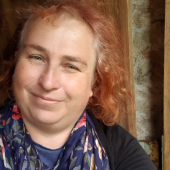 How to cook a Chicken in the Slow Cooker